[ENGLISH] As promised earlier, here a more detailed juridical  explanation about why and how the last NN’ers were released from foreign detention in Zaandam after the Schijnheilig eviction. The full text is in dutch, because it mainly focuses on native Dutch people ending up in foreign detention. We’re working on an english translation that you can find here and on other sites (Indymedia, arrestantengroep.org, ABC Amsterdam) when it’s finished.

END_OF_DOCUMENT_TOKEN_TO_BE_REPLACED

[ENGLISH] The last two NN-prisoners have been released from foreign detention yesterday night. Earlier that day, they won a courtcase about the right to keep them detained any longer.
More information as soon as we get it.

Posted in General | Comments Off on THEY ARE FREE!

Sunday 28 August – 19:00
Budapest – Pesthuislaan Pavilion2 (entrance in the garden to the left)
Amsterdam

On 5th of July the space of the Schijnheilig was evicted. At this
eviction around 150 people were arrested. About a third of them were
placed in foreigner’s detention simply because they made use of their
right to remain silent. In the meantime all but two of them are
released. Not one of them did not have a legal permit to be in the
Netherlands.
A large number of the detainees were brought so far by this
inappropriate repression that their resolve was broken.
Some, however, remained steadfast and eventually started a courtcase
against the state.

On this evening, some of them will tell about their experience what it
is like to be a political prisoner in the Netherlands, how the courtcase
went, and the terrible conditions in foreigner’s detention.

Also we would like to use this evening to write postcards to the
remaining detainees who are still held for their political convicions.

Of course you can also do that yourself. The address is:

(write a date on your postcard, so we come to know how long they are
delayed) 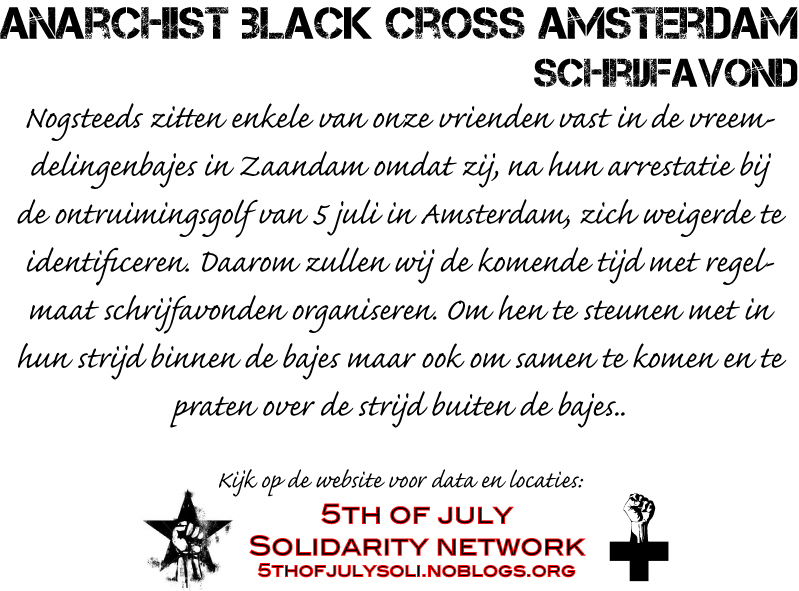 [English]
Two of our friends are still in foreign detention in Zaandam. They are really happy with the mail they got so far so let’s keep that mail coming!

(ENGLISH) Yesterday we were informed that NN1535 has been release from the Zaandam Detentioncentre after revealing his indentity. This means that 2 of the arrested during the Schijnheilig eviction remain in custody (NN1050 and NN1153).

Send them a card or letter, they really appreciate it.

Furthermore we heard that some people succeeded in getting photocopied books into the prison by writing letters on the back of the pages. Unfortunately our last attempt at doing this did NOT succeed. Smaller texts might work

Posted in Legal Information, Solidarity | Comments Off on NN1535 is free!

Call out for solidarity banners

It’s great to see some places allready have put up banners in solidarity with the 5th of July prisoners (and all prisoners for that matter).

But now is the time to not forget our comrades in prison and remind the city that they’re still there.

So get painting and make some great banners or graffiti. Send pictures to 5thofjulysolidarity@riseup.net. Every person sending in pictures gets some free beers in the MKZ. Spread the word! 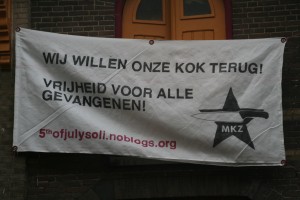 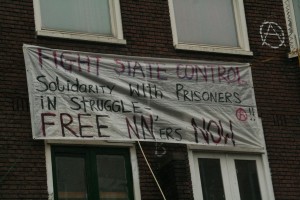 Posted in Solidarity | Comments Off on Call out for solidarity banners

[ENGLISH]
Next tuesday, august 9th, we’ll spend a day making as much solidarity banners for our imprisoned friends as we can. Come and help!
From 12:00 on we’ll be busy in de OCCII, cloth and paint is there but you can always take more ofcourse!

[ENGLISH]
Next friday there’ll be a noisedemo at the prison boats in Zaandam. Come and support our friends and the rest of the prisoners!
Our friends are still in prison since the 5th of july and we don’t like that at all. Actually we don’t like the whole foreign detention centre (or whatever other prison). Therefore we gather at 19:00 at the Domela Nieuwenhuis statue next to the Westerpark. Take some noise and your bike!

Posted in General | Comments Off on A.s. vrijdag solidemo! / Next friday solidemo!

Update over de NN Rechtzaken / Update on the NN courtcases

[ENGLISH]
Finally we have a list of who won or lost their appeal.

Lost? High appeal?
Do you want to go in high appeal, send and email to

info@arrestantengroep.org (before Saturday 6th of August!!!)
After the verdict you have one week to go on high appeal, when you are too late, your appeal will be denied.
We need you to give is in that email the following information:
– Your NN-number, and that you are willing to do this high appeal on your name. Unfortunately it is not possible in Holland to go in High Appeal anonymous.
– Your BSN (Burger service number). If you don’t have a BSN-number (you get this if you are registered in Holland) please let us know too. The lawyers will try for those who don’t have the BSN nr to get a toevoeging at Raad voor Rechtsbijstand. If you do have a BSN nr you have to give it, otherwise the Raad will not accept the toevoeging.
– Your name
– Your address

All this information is needed so the lawyers can ask for toevoegingen at the Raad vow Rechtsbijstand. Because of the high costs for the high appeal, this can only be done if the Raad gets all this info. This information will only go to the Raad and will never end up at the IND or something like that.

If you don’t want to send all this personal information in an email, please call the arrestantengroep at 06 42 41 34 96 so we can make an appointment and you can bring the info to us. (note: everything needs to be at us before Saturday 6th of August)

[This callout showed up on indymedia soooo go and make banners!]

Three of our comrades in solidarity with migrants without papers are opposing to be identified. Our friends should be nobbled for sacrifying their time in resistance in this racist policy of intimidation.

That’s why we should show as much as possible solidarity with them. That’s why we call ( aside from other actions ) for massive solidarity banners action.
Do not ignore it ! They’re there for us and for migrants without papers. We should be here for them. Solidarity is our strength. If You will decide for such heroic step, You also would like that the movement would support You strongly. Just do it now. Let the banners shout from every squat !

PS: For those places what can’t hang the banner i would suggest to stick the posters in the windows.
PS2: Maybe to do together banner making, workshop/session could be provided some place, material and time

NOTE: Some parts of the call out were consciously left out because we felt they were highly unappropriate.
Somebody posted this comment on indymedia that explaines this point pretty well..

Although I strongly support the three comrades that are still in jail, I was rather shocked by the KSU-Oost call-out. Now I did consider going to their hangout this week to just tell them personally, but since Indymedia seems to be also read by people out of Amsterdam I decided to put this as ‘aanvulling’ here. [Sorry voor de rant-gehalte.]

First of all, as one of those who had the doubtful privilege of sharing the H wing of the bajesboot with them for a while, I have to oppose the “our friends should be nobbled for sacrifying their time” and other pseudo heroic crap: these guys know quite well what they are doing and why they are there, and definitely don’t consider themselves heroes (‘ze hebben echt geen kapsones’, is what I mean to say). Yes they need and deserve our solidarity, yes they are victims of an absurd policy, but no, they do not pretend to be heroes, so don’t make them so.

Secondly, stating that “the reason for [jailing them] is just that they’re suspected for not being born in EU” is obviously missing the point. Worse, it’s just repeating the official propaganda. The reason they are being kept there is for being stubborn in their refusal of cooperating. They are “opposing to be identified”, yes, and they do this not only in solidarity with undocumented migrants, but also generally as a statement against state-repression and totalitarian measures such as the ID-law. _That_ is the reason why they are being jailed under the foreign law: if the authorities could jail them under normal law they would, but since ‘not cooperating’ is not forbidden (yet), using the controversial foreign law is clearly a ‘clever trick’ to crack down the resistance against increasing state control (ID-law, DNA-law, digital data retention law, enz).

Thirdly, and lastly, writing that “before, government was intimidating people because of the shape of their nose. Now it’s doing it because lack of papers.” is really embarrassing. Do I need to elaborate? You could say that this government, with the Party for Freedom in their shadow, now shows how much freedom they actually tolerate when it comes to privacy and the right to protest. You could say that it’s reminiscent of how so-called ‘liberal’ ideologies unmask themselves as truly authoritarian and totalitarian when they impose financial ‘adjustment programs’ on countries already crippled by the holy ‘free market’. You could say… a lot, and still avoid making a fool of all of us by crying out that “squatters are the new jews” (or niggers, muslims, whatever).

Jailing ‘foreigners’ simply for not having the right piece of paper is wrong, wrong enough to refuse to let yourself be ID-ed.

Deporting undocumented migrants to some place they don’t want to go to is wrong, wrong enough to organize resistance against foreign detention.

Jailing people simply for refusing to collaborate is wrong, wrong enough to start a solidarity campaign with them and other victims of foreign detention.

So don’t you dare giving me shit about the shape of my nose, you punk!